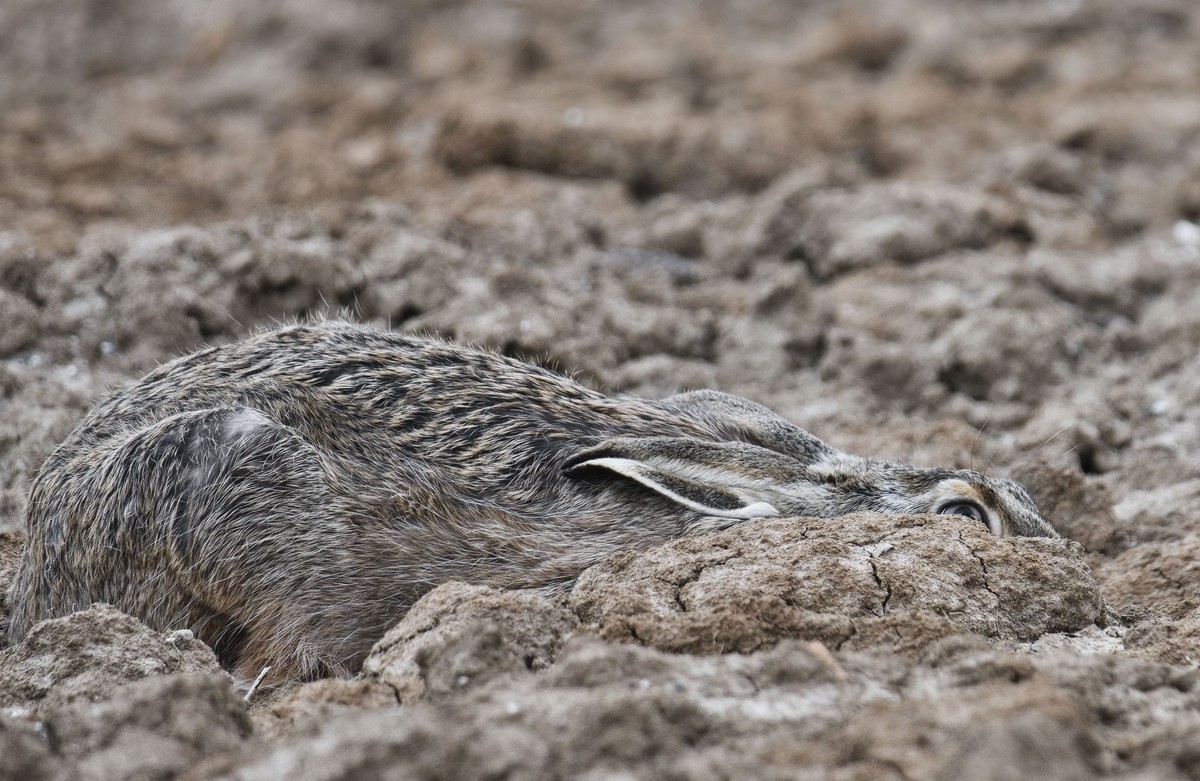 Hidden. Third Place, Young. Trexler: "Agricultural areas like this do not seem very lively. The hare, which I almost ran past, is very well camouflaged here. Due to his natural instinct, he will lie down as soon as danger arises. So I discovered him, quite unexpectedly, five meters away from me."
© Anton Trexler 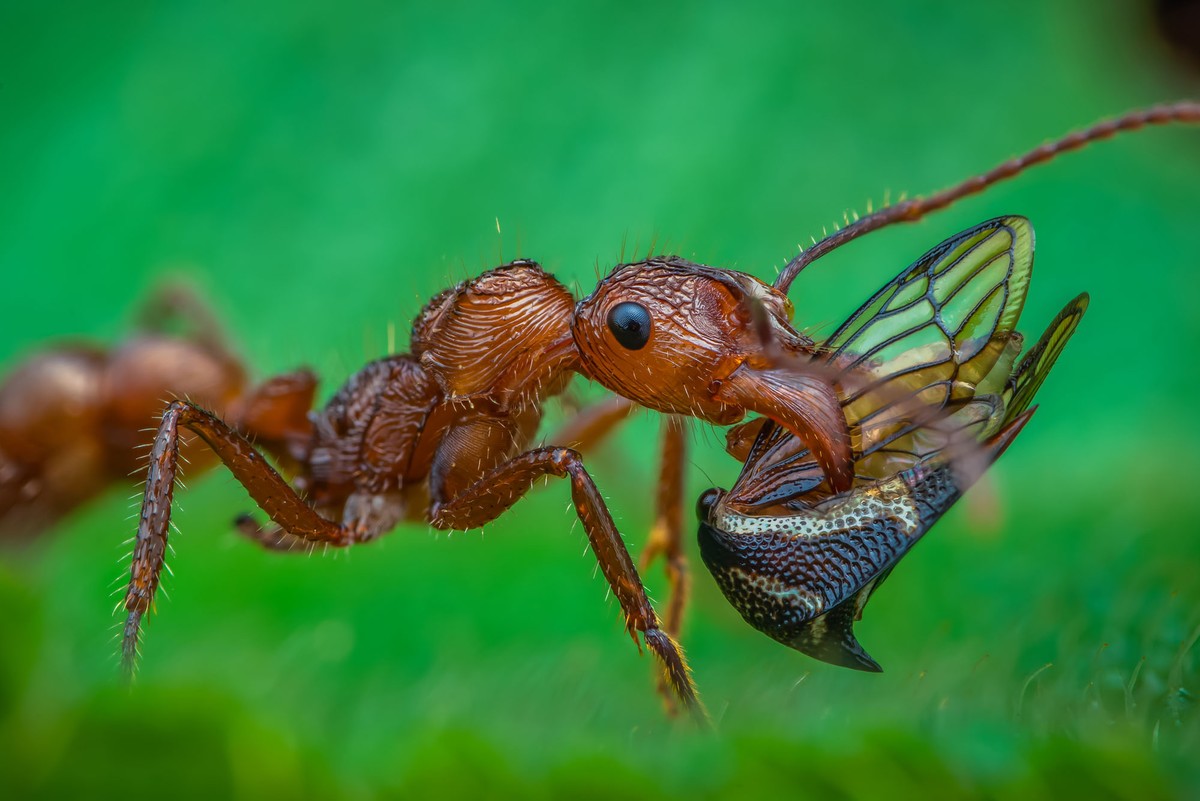 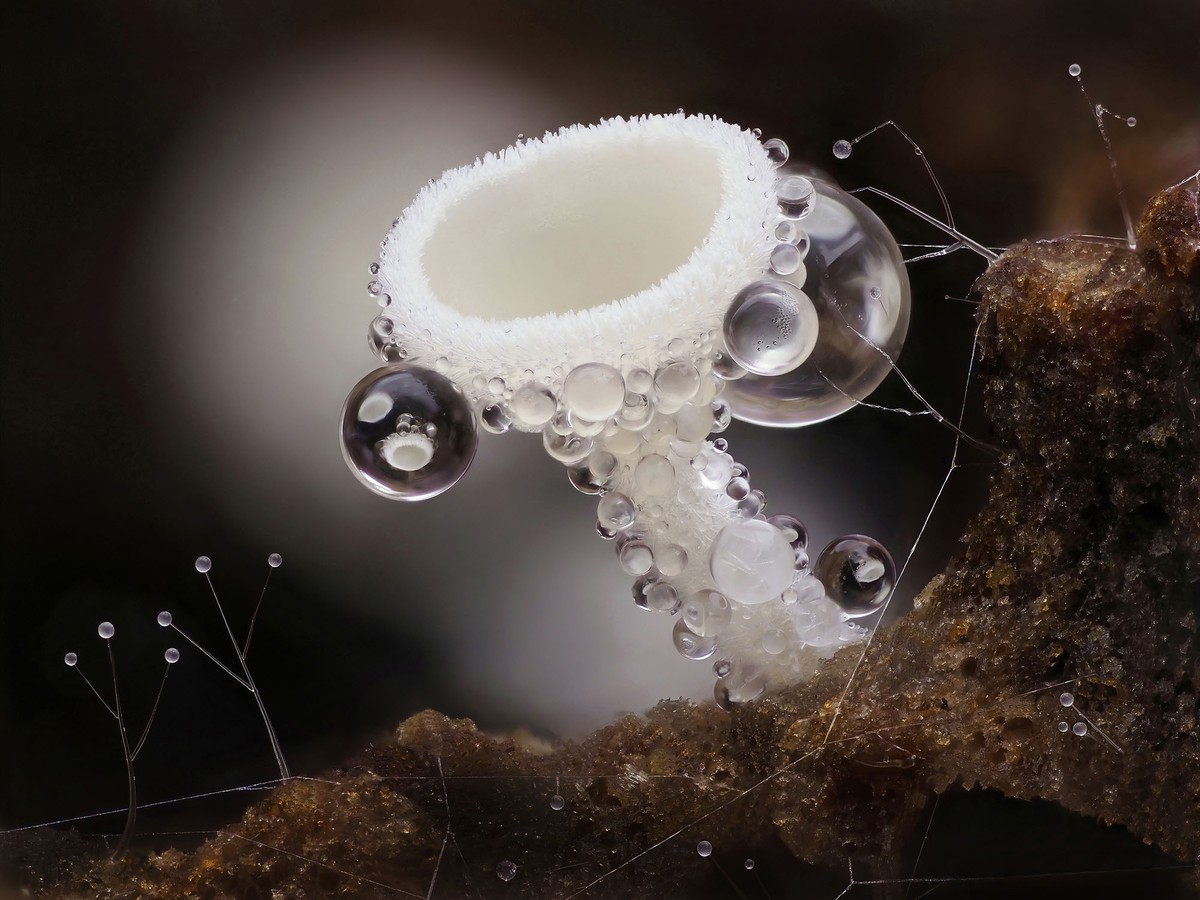 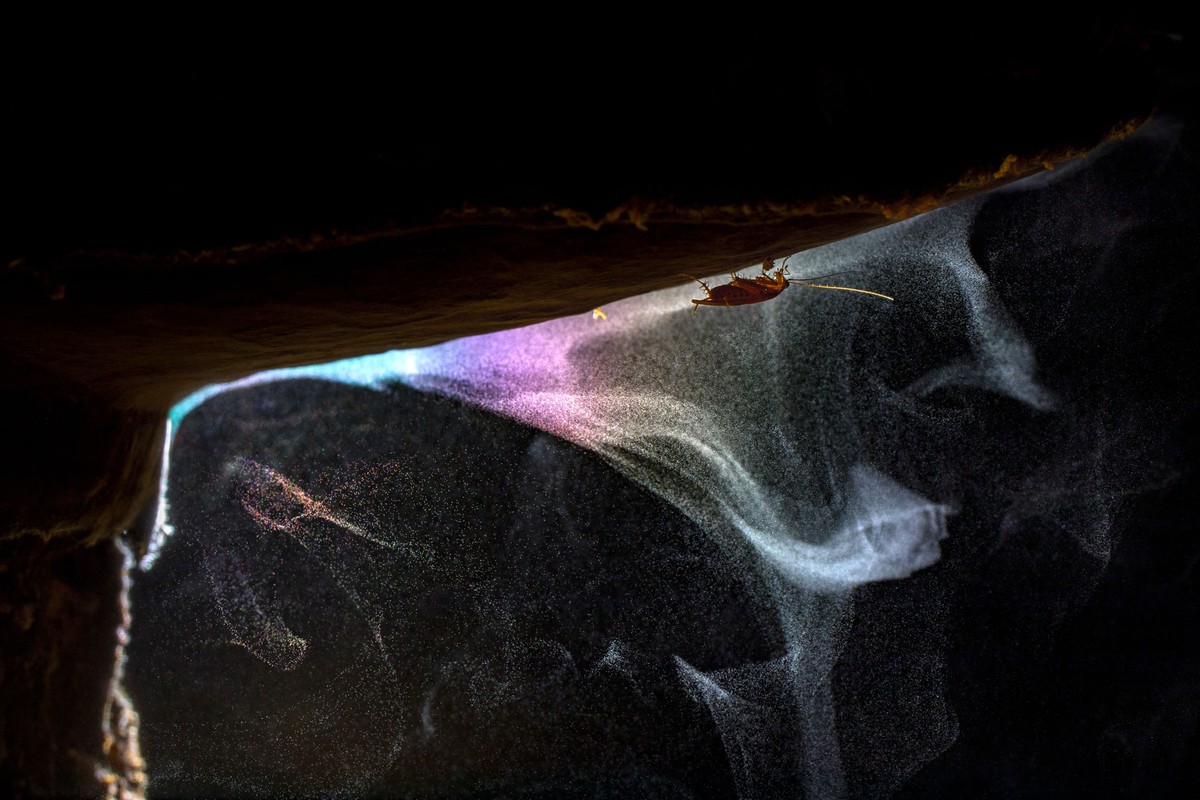 Magic Spores. Third Place, Insects. A bracket fungus releases masses of spores, which caused the refraction of light, while a cockroach is feeding.
© Bernhard Schubert 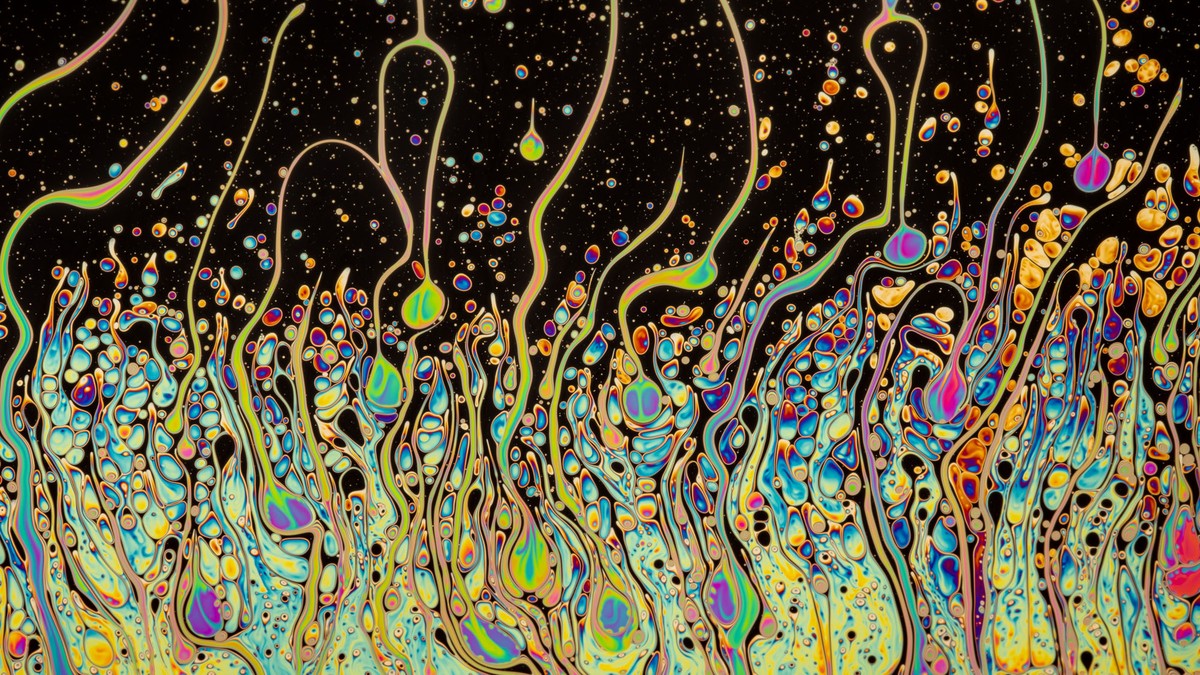 Delusion. Second Place, Manmade. Militelli: "A soap bubble lasts mere seconds before it bursts and returns to its original form. This image seeks not only to portray the ephemeral life of an apparent common physical phenomenon, but to also show the most diverse colors and mesmerizing patterns.
© Bruno Militelli 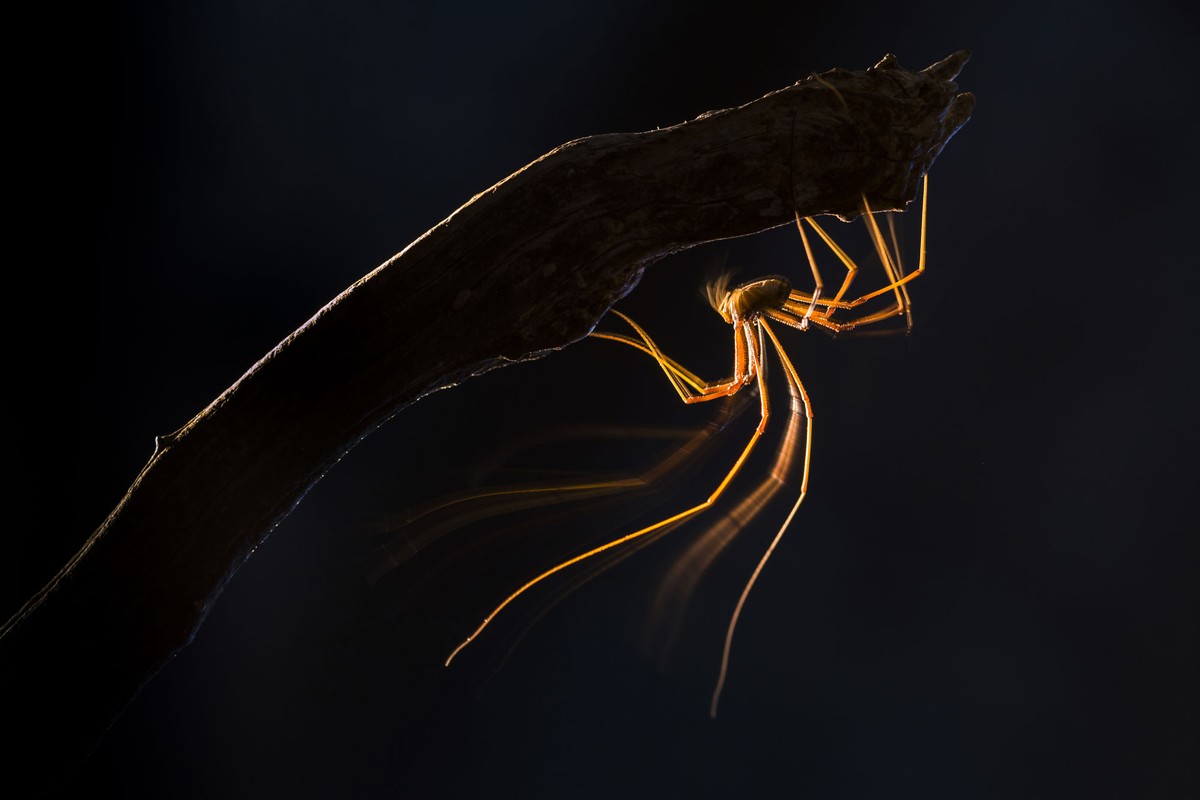 Dancing in the Dark. First Place, Animals. Ahumada: "This opilione (harvestman or daddy long legs) moves along a dry branch in a small hollow created by a landslip on the hillside of Sierra Blanca, Andalusia. These creatures are blind and use their front legs to guide themselves in the dark. With little space to move, I managed to light the subject from behind and used a 20-second exposure to capture the movement of its long legs."
© Juan Ahumada 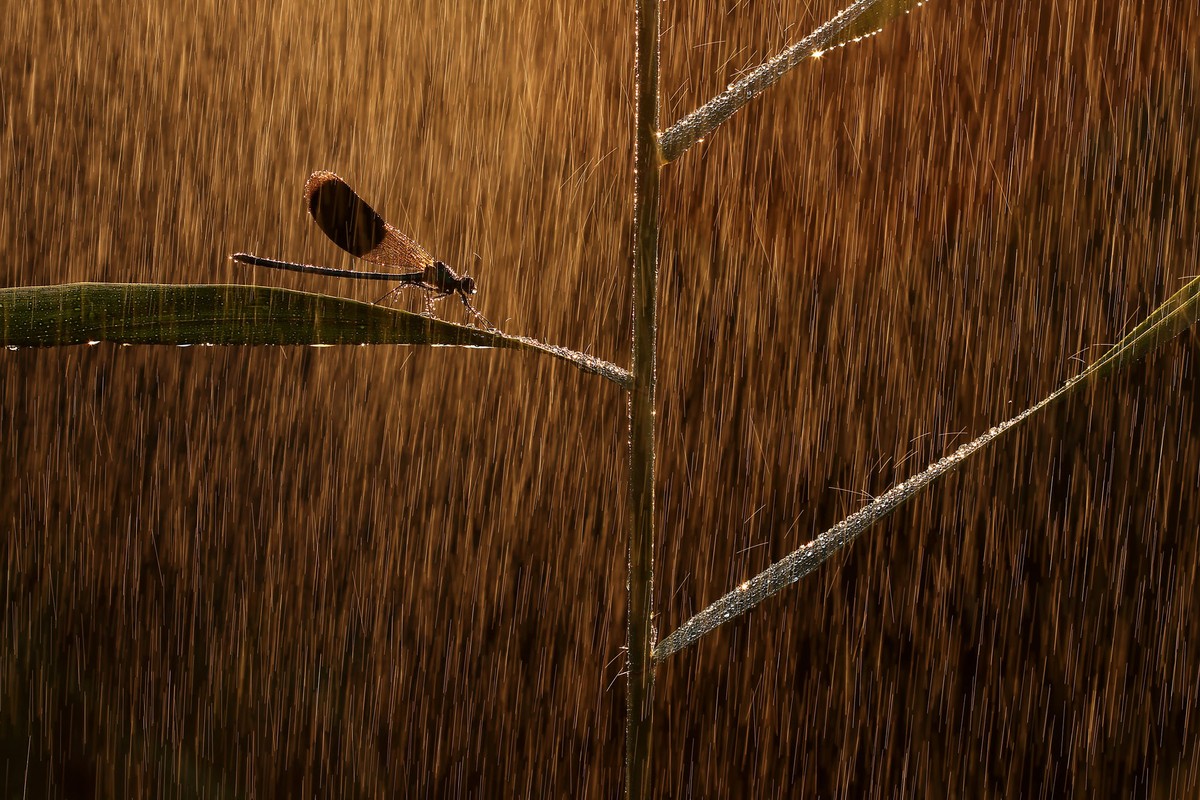 Golden Rain. Butterflies Finalist. A dragonfly perches on a leaf during a downpour.
© Norbert Kaszás 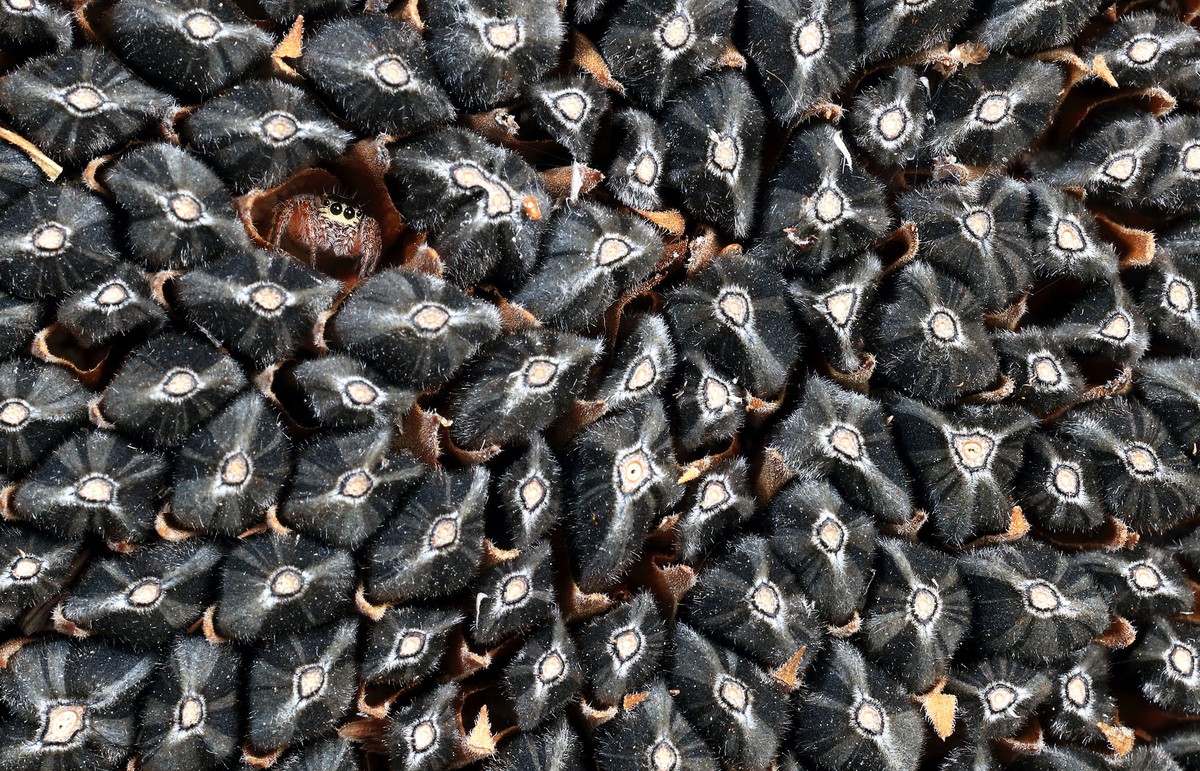 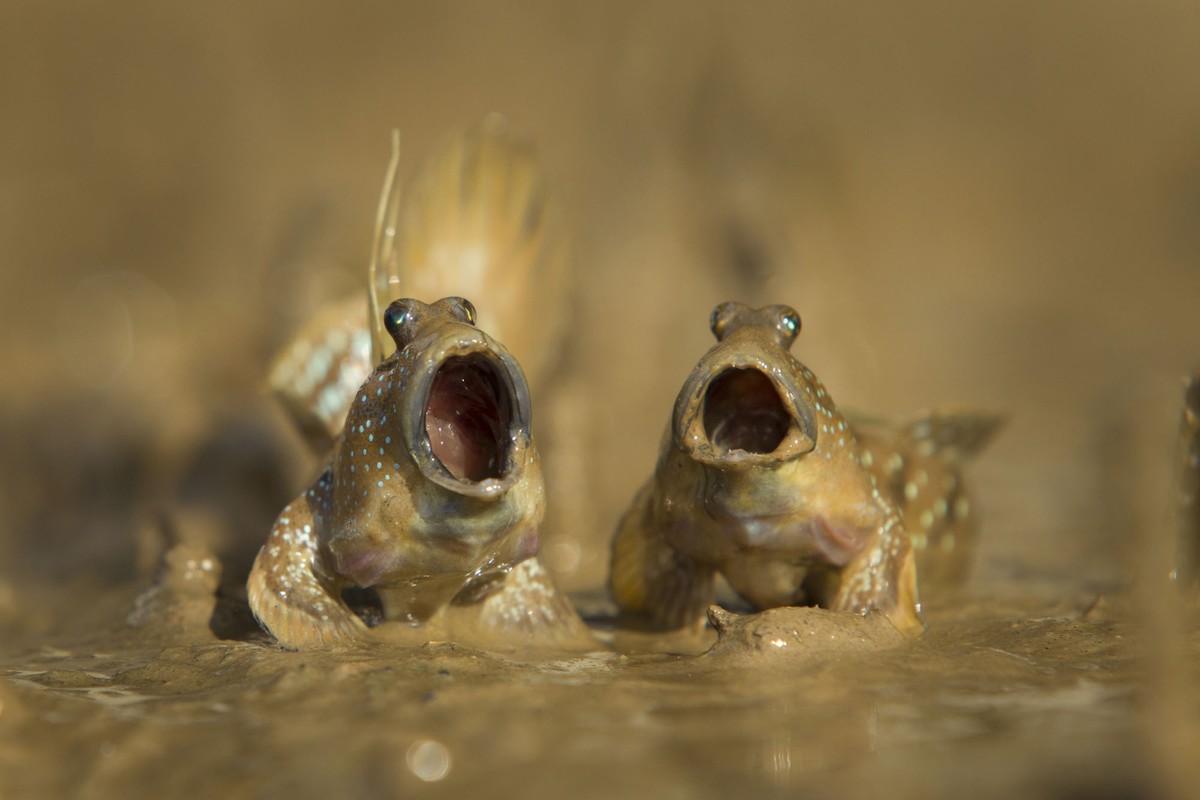 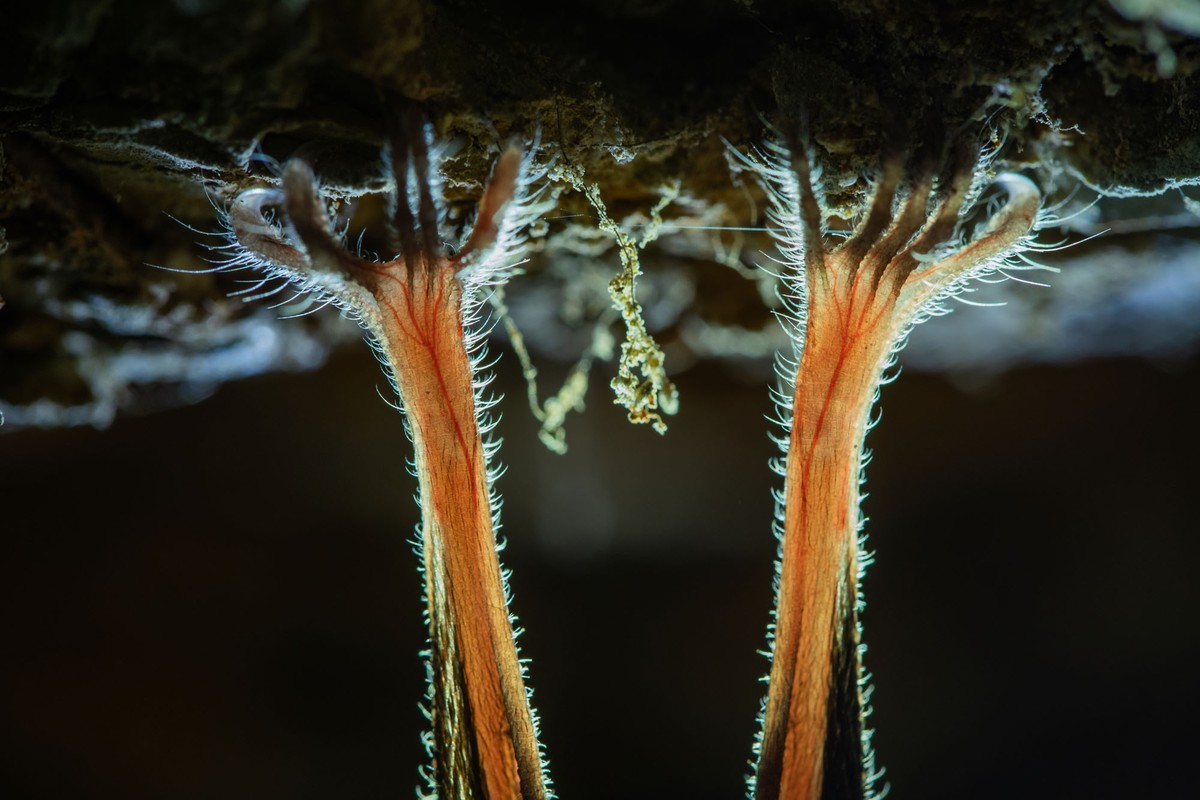 Tiny Details. Third Place, Animals. The feet of a bat, seen in an abandoned mine in Hungary's Börzsöny hills. Sztrehárszki: "The photo shows the smallest horseshoe bat in Europe, the lesser horseshoe bat. Composing the picture in the silent darkness I only used a single flashlight with great care, trying not to disturb the hibernating mammal. I attempted to frame the picture to highlight the delicate feet of the bat as it hung upside down, clinging to the rock with its tiny fingers and claws, using special locking tendons. The backlight emphasizes the veins under the thin skin and the light hair on the tiny feet."
© Lili Sztrehárszki 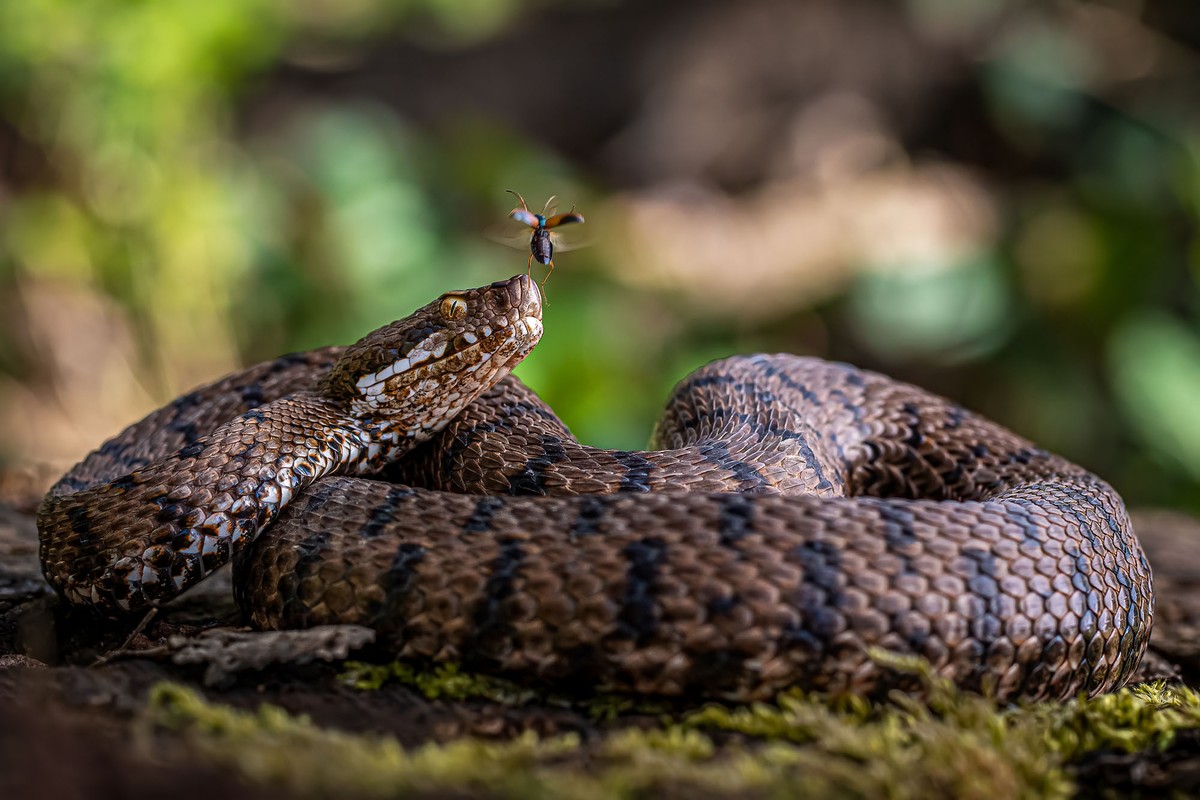 Take Off. Animals Finalist. A beetle takes off from atop a snake.
© Dario Quattrin 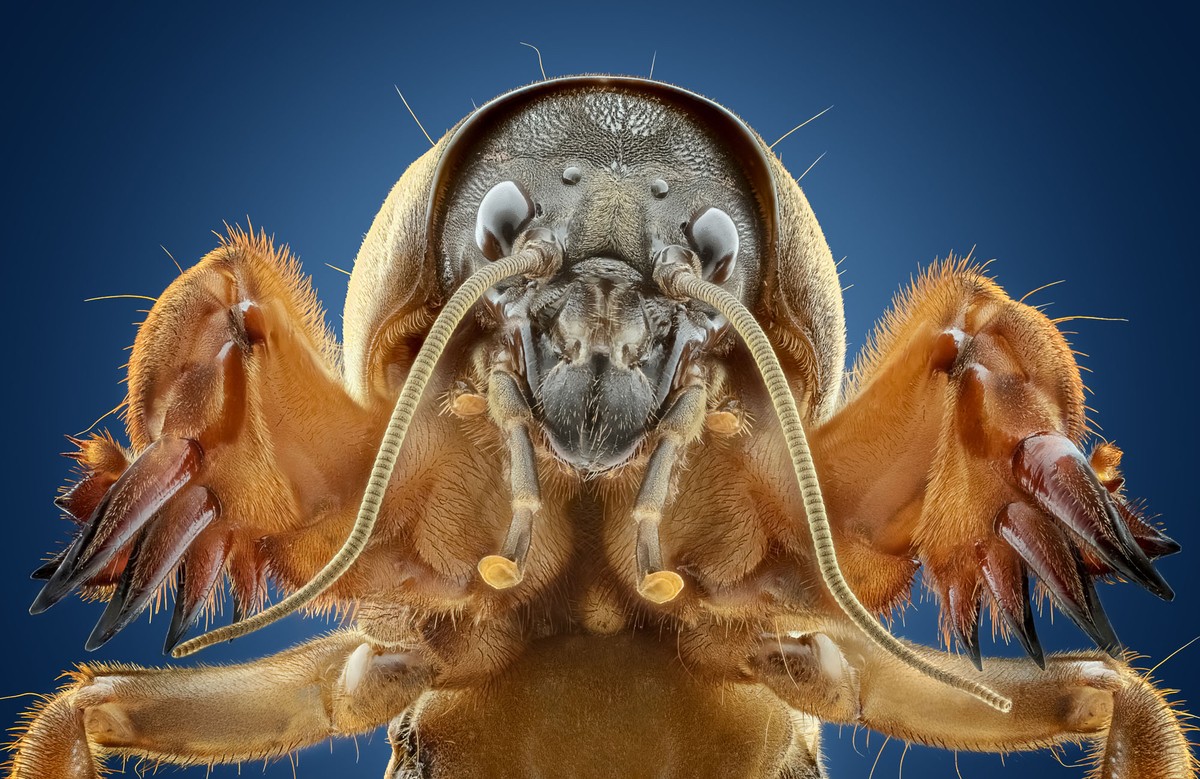 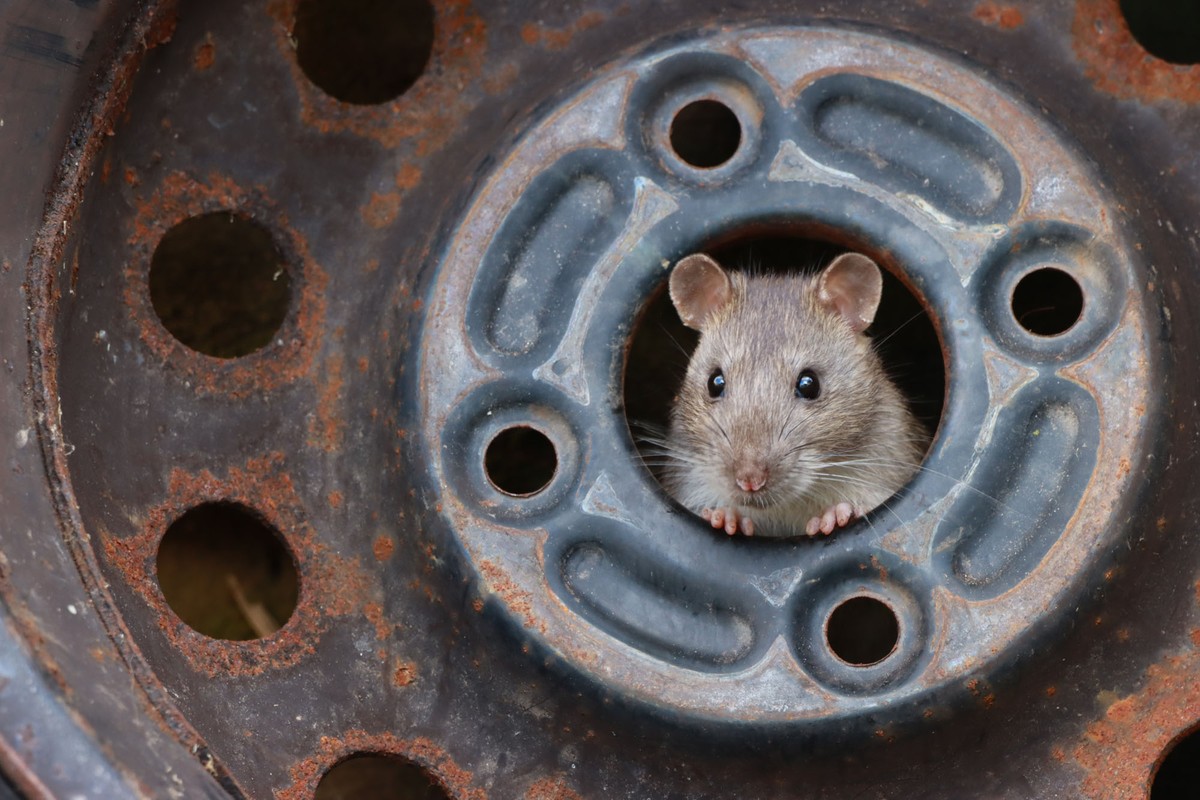 Rat in Tire Hub. First Place, Young. Boulton: "I noticed this rat peering out of an abandoned car wheel in a farmyard near my home in Cornwall, England. It was framed so pleasingly by the concentric circles of the tire that I came back the next morning with my camera in the hope of capturing the moment
© Ezra Boulton 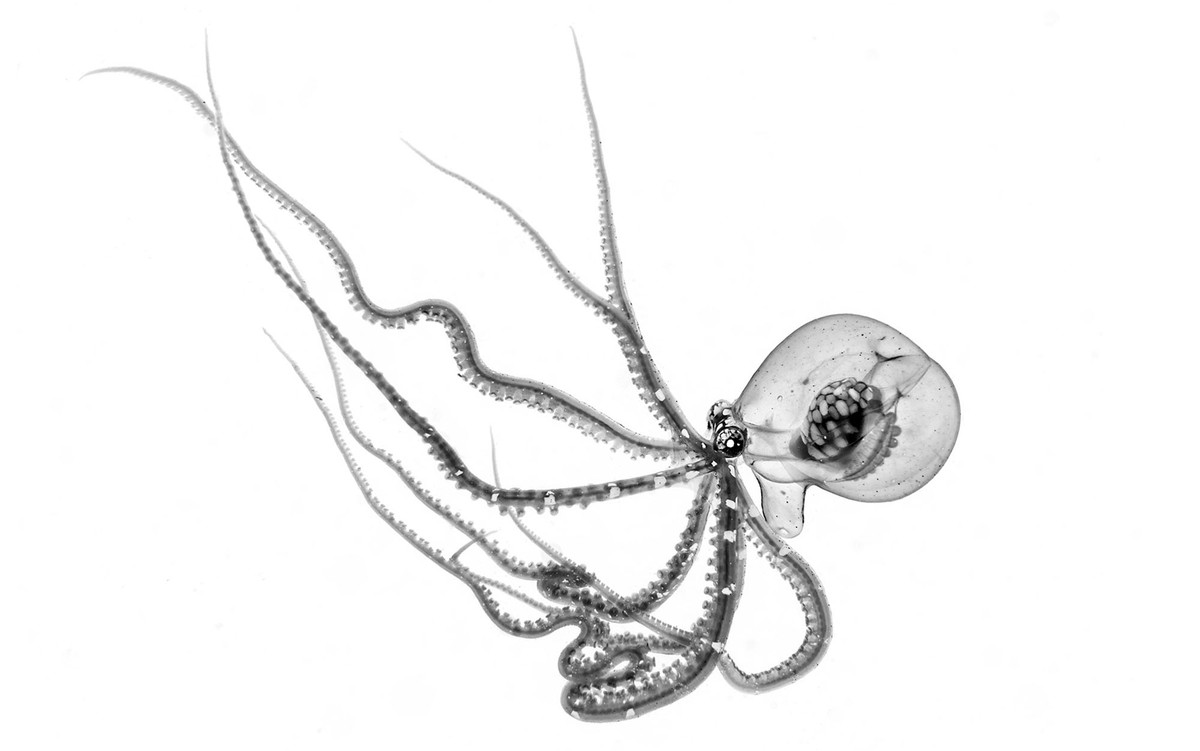 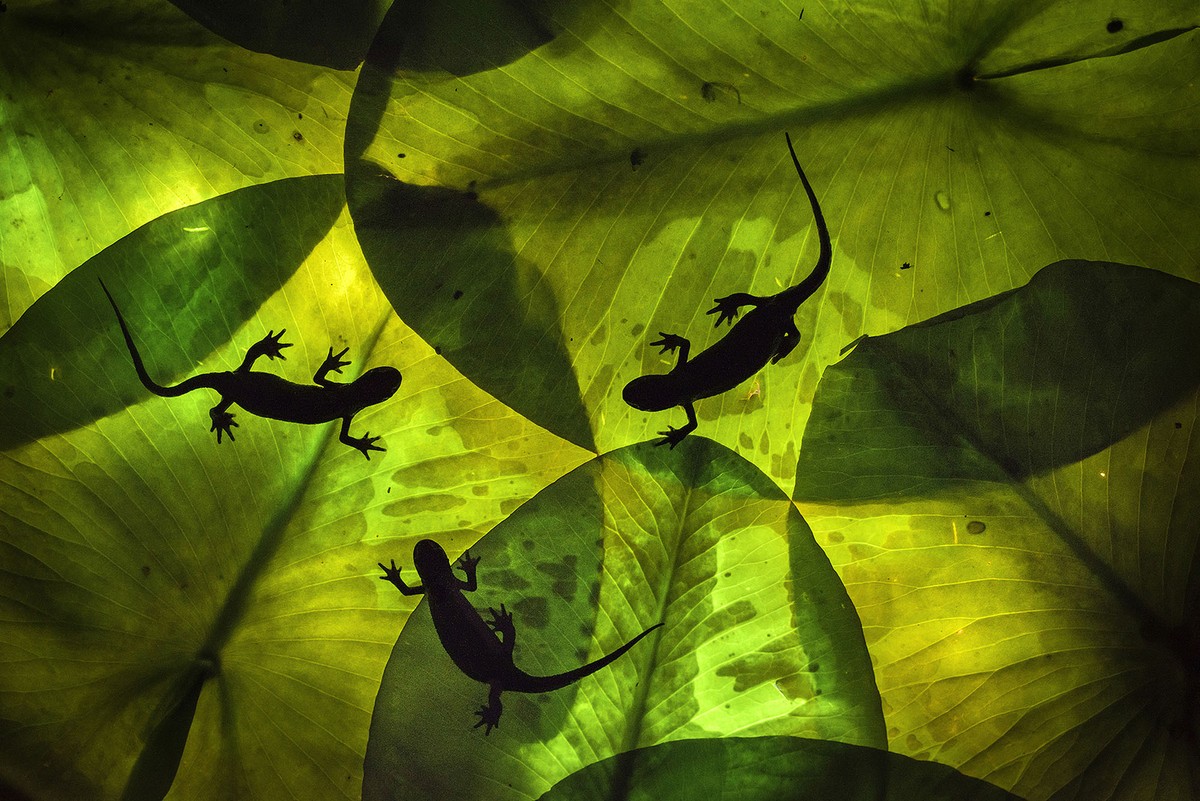