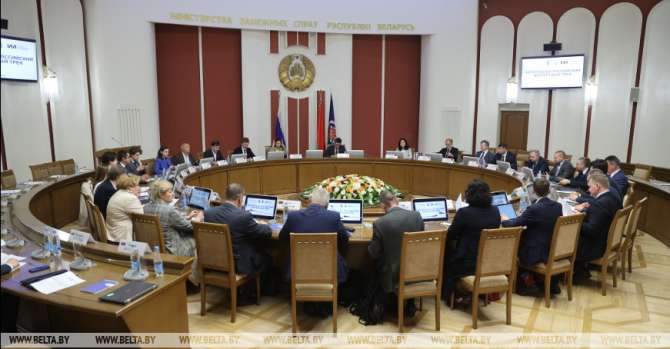 The time has come for a global process involving all leading international players to reach clear agreements on the rules of a new world order that will provide security guarantees to all, Belarusian Deputy Minister of Foreign Affairs Yuri Ambrazevich said as he addressed the Belarus-Russia expert meeting in Minsk on 21 June, BelTA has learned. The deputy minister drew attention to Belarus' proposals to resume a broad international dialogue on strengthening confidence-building, security and cooperation measures in Europe (Helsinki-2) and on developing a subregional "belt of digital good-neighborliness". "At the current stage, the president of the Republic of Belarus looks even further ahead and suggests a truly global and determining process involving all leading international players in the spirit of San Francisco. In principle, this idea is consonant with those voiced by a number of world's leaders, Russia and China, and suggests reaching clear and transparent agreements on the rules of the new world order which will provide security guarantees to all members of the international community for the foreseeable future," Yuri Ambrazevich emphasized. "Unfortunately, so far we have not seen either the readiness or desire of a number of world players to take seriously such seemingly obvious things that are vital for the world and further stable development of our planet," he stated. "Perhaps the time hasn't come yet." "Many of them still believe wholeheartedly in their unconditional victory, in their ability to maintain and strengthen their premium status at the expense of the oppression of others. This is one of the natural global reasons," Yuri Ambrazevich said. At the same time, he expressed confidence that "history will put everything in its place, and then, as it has happened in the past, competition will begin for the authorship of the Belarusian initiatives."
Moscow.media